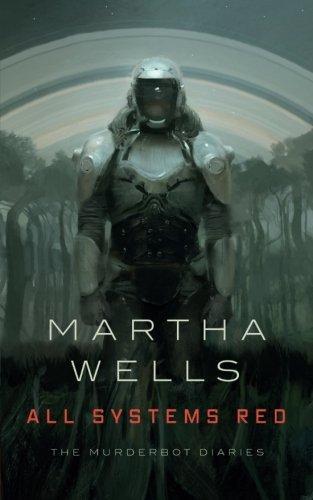 In a corporate-dominated spacefaring future, planetary missions must be approved and supplied by the Company. Exploratory teams are accompanied by Company-supplied security androids, for their own safety.

But in a society where contracts are awarded to the lowest bidder, safety isn't a primary concern.

On a distant planet, a team of scientists are conducting surface tests, shadowed by their Company-supplied 'droid—a self-aware SecUnit that has hacked its own governor module, and refers to itself (though never out loud) as "Murderbot." Scornful of humans, all it really wants is to be left alone long enough to figure out who it is.

But when a neighboring mission goes dark, it's up to the scientists and their Murderbot to get to the truth.

the murderbot is SNARKY. i don't have much else to say about this book other than go read it, it's good and only 150 pages long

I read this a couple weeks ago and could tell you approximately nothing about the plot! I remember having a nice time reading it? It's short, which is to its credit. There is some stuff about untrustworthy corporations, and the main character is a robot whose robot-ness seems to be a metaphor for neurodivergence of some kind? I don't know. It never really came together but also, hey, it was short.

This was nice. Extremely pulp, but managed to get at some larger ideas.